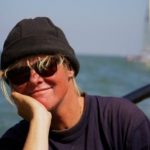 Captain aboard of the Kaat Mossel is Sjak

She took leave from her career as a probation officer in 1999 and started working in the sailing business as a sailor, beginning at the bottom of the social scaling. In 2002 she promoted to skipper and after seven years of working in paid employment she started her own business.
The sailing travel agency Sjakzeilreizen exists five years now and has been growing ever ince into a well-known concept. 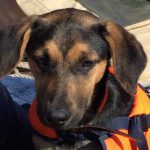 The ship’s dog Sofie, came aboard as a pup in 2016 after Janneke, the former shipsdog died in the winter before.

During the saison we have to sail with a decksman/first mate. He/she gets educated in guiding groups, maintenance the ship in several issues.